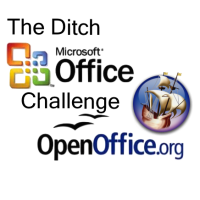 I am going to take a quick break from WordPress related topics to discuss a new challenge I have set for myself in hopes of proving that it would be possible for my employer to ditch Microsoft Office in favor of an OpenOffice alternative. It’s easy to say that OpenOffice can replace Microsoft Office, but it’s quite another thing to prove it and be able to back up your claims. So for those of you who have thought about it, but don’t have the time to do a full suite of testing yourself, I hope you might find this useful.

I started my challenge on February 2nd after doing an analysis that would cost between $10,000 and $15,000 per year for upgrades and new licenses of Microsoft Office 2010. Let’s face it, times are tough and that’s not an insignificant amount of money. I’m a big believer in dogfooding, so I figured before I can recommend ditching Microsoft Office I would need to try it out myself for a while. So the 1st thing I did was go to OpenOffice.org and download the latest version for Mac.

It started out very promising. Files opened without incident and it looked pretty sharp. I was even able to quickly set my computer to open files associated with Microsoft Office with the new OpenOffice.  But things took a significant turn for the worse once I had to start working on files that I share with other people using Microsoft Office. In fact, the OpenOffice version of Excel, Calc, crashed between 15 to 20 times working on just one file that I received from our finance department. Not only did it crash repeatedly, but OpenOffice has this rather annoying file recovery Wizard that pops up every time it crashes. In principle, this seems like a good idea, but of those 15 to 20 crashes the wizard only recovered the file once or twice without crashing again; and only one of those recoveries that succeeded actually had the correct version of the file (without any lost work). Keep in mind, I wasn’t doing anything particularly challenging with the given spreadsheet. At one point it crashed 4 times in a row while I tried to change the highlight color of a few cells. I gave up.

To be honest, I thought my challenge was going to be over before it even started, but on the advice of a few friends I did some additional searching for some better Mac alternatives. I was able to find two other options, LibreOffice and NeoOffice. I eventually settled on NeoOffice for the simple fact that it appeared to be the most Mac specific port of OpenOffice. The newest version even incorporates many of the new the features of Mac OS X Lion, including full-screen, versions, and resume.  To my knowledge, the latest version of Microsoft Office does not even support those things.

The latest version of NeoOffice requires a donation for the download. I figured that as long as my testing went well I would be more than happy to spend $10 for the download, but for the time being I decided to stick with the free version, 3.2.1.

So far, after about a week of testing, I am blown away by the quality of NeoOffice. I was able to work on the finance spreadsheet with ease and send it back to the Microsoft Excel user who was none the wiser. I was even able to share a word document that needed comments with “track changes”. While I was unable to find the track changes menu or option, it automatically began tracking changes without any intervention on my part, which I considered to be fantastic!

So far, my only gripe with any version of OpenOffice is that they don’t seem to support .xlsx, docx, or .pptx saving. In other words, it’s no problem to open those file types, but they can only be saved back into the older Microsoft Office formats. While not a major issue for me, it could be a problem in certain environments.

I would love to hear from other people who have tried the same thing or are currently struggling with the same problem. If you have any tips or tricks, please share them in the comments. I will report back in the coming weeks with my additional findings. I’m also hoping to do some testing on the Windows side, but I’m not as concerned with the stability of OpenOffice on Windows as I am with the Mac.